Day 1: The Wind, the Rain But Can't Complain(The Good Stuff)

Something happened on the way to San Francisco- a pit stop in San Jose airport (SJC). I didn't get the memo of an arrival change until just before boarding. No e-mail alert, nothing. I kept hearing and ignoring calls for San Jose boarding but eventually I put 2 and 2 together and realized San Jose was meant for me. Would have been nice if Alaska Airlines put the arrival change on the gate screen - but no biggie. I made it on board my Saturday morning flight, landed safely at SJC and caught a free shuttle bus to SFO. Hilarity ensued with the funny driver doing his "sit-down" routine to entertain all of us weary SFO-bound passengers. He joked about just getting his driver's license and that the bus will go to Napa instead of San Francisco (Well, it would have been perfectly OK if he were "Syrah-serious" about Napa). 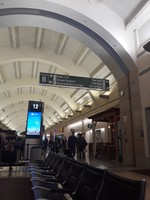 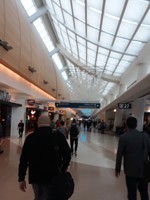 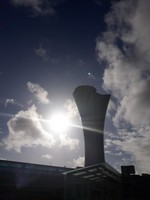 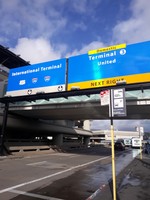 San Francisco smacked me in the face. Oh those swift, infamous and ballyhooed gusts blew right on in. And then came some wind-whipped raindrops. Indeed, I was not in Los Angeles anymore. Though it does get nippy in LAX area, San Francisco winds are something else! Right before stepping onto a warm hotel shuttle, I looked around and admired SFO. Yes, I said "admiring". Travel professionals do that sorta thing. How organized and efficient this grand, gray travel ensemble. When growing accustomed to swirling, stressful mess that is LAX, I know a difference right away! 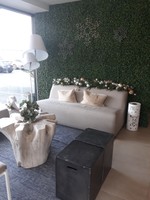 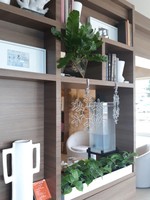 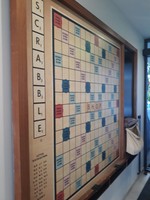 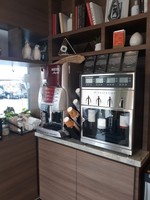 Spending Time at (with) The Dylan

About a 5 minute shuttle drive later, I arrived at my first accommodations in Millbrae. The Dylan is like a fellow who is kinda slight but impresses with a mix of old and new school charm. This girl was won over. Deem Dylan a lux- motel, all dressed up with a modern, homey decor style especially dapper during the holidays. The most winning qualities of the Dylan? Humble hospitality and home cooking ability. Dylan does delicious, free breakfast. My plate was stacked up twice with egg casseroles done two-ways and cube cut potatoes, along with fresh fruit and yogurt. As much as the eating experience was enjoyable, Dylan decor touches in the extended lobby are uniquely stylish. The dining room features a quirky comic inspired mural. Features in the lobby include a giant Scrabble board and (get excited wine lovers) a flowing "vino machine" with 4 varieties from which to indulge. Tempting- but I was good though.

After getting my early S.F. grub on and admiring the lobby, it was off to my 2nd floor room. It was a perfectly fine, spacious place to stay. I tested out the bed: Comfy and big enough with a bonus of a manly figure (I call him Superman) etched out on the headboard, exposing his chest with the S.F skyline . Nice, so I didn't have to go to bed alone!

There was not a lot of time to get comfortable in the room. It was time for some San Fran exploring. Off I went! 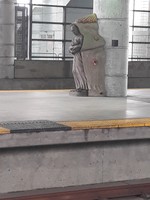 Few fallen raindrops became a persistent sprinkle during the 5 + minute hop-skip-jump from The Dylan to Millbrae's transit station. From here began my first BART (Bay Area Regional Transit) light rail experience. After studying the BART routes, I dedicated to head up from Millbrae to the Embarcadero area. It was a smooth ride along the way- but short of very pleasant due to the screeching from the rail car at times (Note to myself: pack ear plugs next time). Fellow BART riders thankfully did not contribute to the racket. They were quite non-chalant on the way to Embarcadero and throughout my Bay Area journey trip. It was a proud moment on the ride up after riders swiftly swooped to the rescue of a wheelchair-bound man who had been almost jolted off from the hard rail car braking. What humanity! No one around remained glued to their cell phones pretending not to see him getting slammed sideways. What was odd to me 'bout BART: the configuration of the cars with couch-like, forward facing single seaters on one side but two seaters on the other side. More notable though was how beat up and filthy the seats were. Perhaps, some of the exorbitant taxes of San Francisco will go to renovating BART cars someday. Hmm... Wishful thinking... 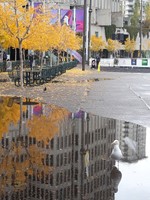 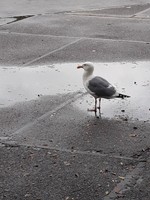 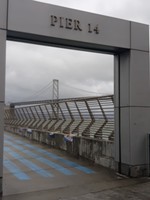 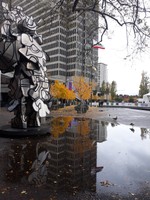 A steady sprinkle turned into bonafide rain after leaving the Embarcadero BART stop. With hood on, I made my way towards the Ferry Building. Right before getting shelter inside, the autumn loving shutterbug in me had to capture the scene of brilliant yellow foliage reflected at a dampened Embarcadero Plaza. Continuation of rapture came within the Ferry Building. Stepping up to the second floor, my eyes fixated on the architecture of the place. All the while, my ears were entertained by Christmas music performed by a Sacramento-based orchestra composed of school kids.

Heading back down to the first level, it was time to let my taste buds delight in the Ferry Building. Oh, the numerous foodie temptations to try! Contenders for my appetite along 1 Ferry Building included: signature American and local #1 favorite, Gott's Roadside; Cowgirl Creamery's sandwich counter offshoot , Cowgirl Sidekick; seafood staple, San Francisco Fish Company, and empanada shack, El Porteno. Ultimately, barbeque heavy Golden Gate Meat Company was the winner -a surprising choice for me actually. BBQ is hardly ever my go-to gastronomical choice though but is difficult to pass up perfectly smoked flavorful meat that calls your name with smells alone. I ordered 1/4 beef serving but also had a square cut pizza to pair. A vacay getaway is never complete without trying a local pizza slice.

Ferry Building became one of the most impressive and unique shopping destination ever visited. Food shopping alone is an artisanal nirvana with premier indoor restaurants and cafes, but wine and olive oil stands, healthy juice-smoothie- kombucha stops and certainly not last and least, donut and ice cream shops. On the exterior, the Farmer's Market (remarkably Apple Pay friendly, naturally in Silicon Valley adjacent S.F) is a delicious stand out in its own right. Gifts and souvenir buying is quite unique. Lots of locally-sourced body care from Benedetta, Sausalito- made pottery from Heath Cermanics, home and garden items are worth to buy and pack for home delight.

Indeed, Embarcadero was my happy place of the trip. Beyond the interior delights of the Ferry Building itself were the peaceful moments of bird and ship watching. Even the steady rain did not dampen my spirits. After ogling the various seabirds, I took a stroll over to Pier 14. Along the way, a few street art displays caught my attention: one official a vibrant art installment of famous San Francisco landmark, Coit Tower, and an impromptu street find, an assortment of de-stemmed sunflowers on a plate with a matching yellow candle on its side. 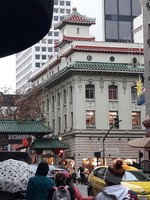 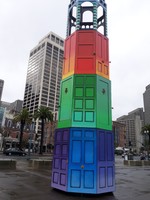 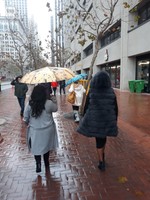 Getting Lost Purposely in the Rain

From late morning to early evening, precipitation levels varied. Rain was so much to bear at a semi open Market Street bus top, so the decision was made to take cover in a cable car. Indeed, cable cars are tourist trite but they're simply cute and the ride was free. After getting my kicks from the complimentary lift, rain subsides a bit enough to do some idle walking in the Financial District. Soon after though, my soles got tired , so I thought to get a ride share. Bad idea. I was in the very tight heart of downtown where it was super challenging getting Uber or Lyft driver to pick up directly. Frustration poured down my face more than the rain trailing down. Eventually, I hopped on the $3 Muni (SFMTA) bus and winded through Chinatown (Note: Try to avoid Chinatown bus crush especially in the afternoon next time).

I thought to kinda wing it 'round the city for a while on the Muni. From Chinatown, I toured Russian Hill, North Beach and Cow Hollow- "good" northern neighborhoods of S.F. in which folks pay a filthy fortune to reside. Through the soaked bus windshields were merry scenes of Santa Pub Crawl featuring drunken young dudes and especially scantily clad gals in Santa get-ups. making their way down flooded streets. One girl just ate it big time on the pavement in Cow Hollow area in a failed attempt to jump a huge puddle. Ho! Ho! Ho! hilarity!

By early afternoon was the peak of rainfall. Even a middle aged local on the bus said that it was the most flooded he had ever seen. After waiting out a heavy rain episode and grabbing a pizza slice in North Beach, it was time to bus and BART my way back to Millbrae and The Dylan. The rain subsided later sometime after sunset and crashed in bed with my hovering etched out "Superman" protecting me through the night. 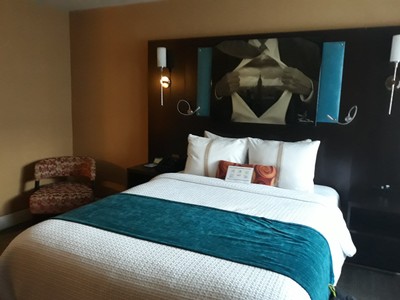