Well rested and fed from The Dylan, I BART-ed up north from Millbrae to S.F. city to see classic bay beauty, Golden Gate Bridge which never gets old to admire. She was as magnificent as when I last saw her, ages ago. Unfortunately, there was not enough time to do a combo Golden Gate Bridge- Sausalito tour (Next time, there will be.) I found a lot of peace merely gazing at the crashing waves and admiring the plant life I didn't go full on tourist at the Golden Gate Visitor Center- but just took some nice shots nearby in the park area. 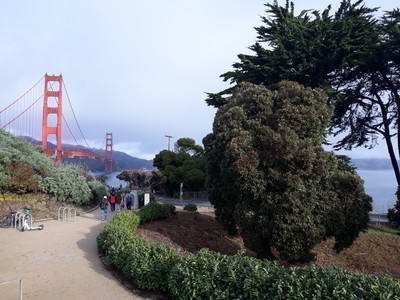 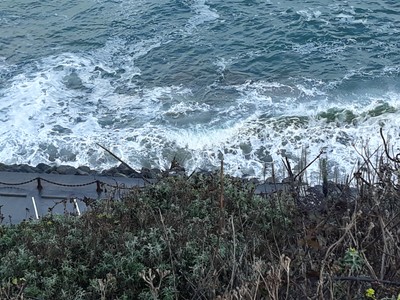 The visitor center area was getting too tourist-filled for the liking, so it was time to move on. I hopped in a rideshare and headed towards the convergence of Marina Blvd with Mason St to stunning Palace of Fine Arts, Designated S.F Landmark #88. Oh, I needed more time to walk through in and around this marvelous structure and greet the swans and geese in the lake! Next stop was a visit to Fisherman's Wharf to pay my respects to main S.F. Marina-land via aptly named Marina Boulevard. Dotted along the way were handsome classic Franciscan homes and a long stretch of boats- all worth a pretty penny. This nauti-girl can only dream to live here- the most picturesque part of main S.F city center to live without worry on poop and pervs on the street. 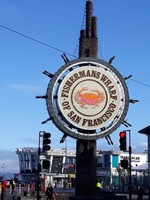 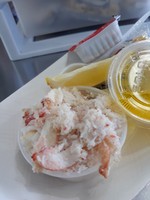 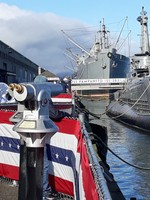 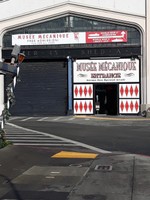 Finally at Fisherman's. Within steps of the wharf row of seafood shacks were shouts of the counter guys, "Get your fresh crab" and "Clam chowder here". It's so easily to give in to the temptations- and I did with a meaty $10 crab snack with melted butter on saltine cracker on the side. This time there was no giving in to a carb-loaded sourdough bread bowl soup or sandwich at flagship Bourdin Bakery & Cafe Just before eating, I briskly strolled walk along Pier 45 and through whimiscal Musée Mécanique, an old-timey arcade featuring vintage game displays. OK, the puppet displays were a bit freaky, Lack of time stopped me from skee-balling and teaming up for a min ice hockey or foosball match. 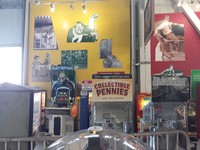 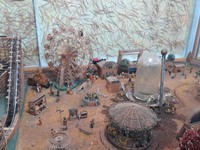 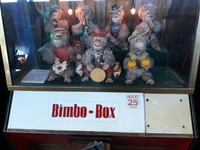 Around noon was a swift check in at Millbrae hotel #2, Aloft. After briefly feeling out my new boutique 'Brae accommodations, it was off to the East Bay to venture in the "Dark Side"- that is Oakland. A seedy reputation often precedes the heart of the city- with good reason. Oakland's the ragged, disheveled little sister of San Francisco with more squaller and higher a propensity for crime. At least there is some sparkle to Oakland. How it shines quite nicely off the East Bay and its outskirts aren't so bad actually.

The Rundown: Oakland Coliseum and the Raiders 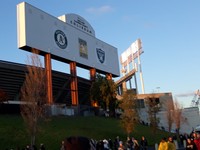 There was just one true reason why I had ever held Oakland dear: NFL's Oakland Raiders. The Los Angeles version of the team was the main team of my childhood. It hurt when they moved from L.A. back to their original home of Oakland in '94- but eventually came acceptance and support of their Norcal origins. Long after attending games at L.A. Coliseum, here I arrived at O.G. Dark Side Manor, Oakland Coliseum, to which the Raider organization bid farewell on December 15, for good. In witnessing the venue, it was stark clear why the Raiders said by-bye to Oakland. The place is a dump and no real efforts were made for renovation. It was as if the place had never, ever changed since the 70s. The pedestrian bridge leading to the parking grounds was a shabby barbed wire mess and pavement all around was woefully cracked up. As for the Oak Coliseum playing field, that was a patch-filled makeshift misery that should have never been approved for football.

The Game: TEN at OAK 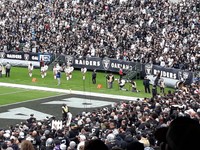 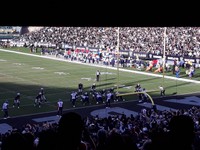 Game on ! Despite the Raiders approaching departure , I and fellow fans were getting hyped for the Silver and Black versus Tenneesee Titans. This was the game before the swan song game at Oak Coliseum. Unfortunately, after the 2nd half, hype turned to headache as the Raiders got rundown by Titan dominance on both sides and lost , 21-42. Ugh! Long faces over the loss to the Titans and moreover the team itself
About as long as Raider fan faces was the wait to get on the BART and Amtrak from the stadium. Brutal! Good thing no one yelled, "Fire" in the sea of silver and black Raider revelers

Lounging It , Longing for Food at Aloft 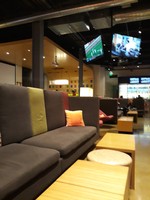 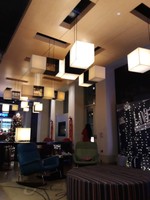 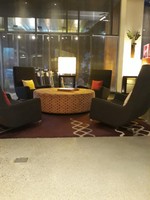 Back to the Aloft, time to unwind. My feet were so beat. It was almost a struggle winding my way through a hallway that seemed to go on for a mile until reaching my room. I broke into the bed for a bit but later went down to the main lounge parlor to observe and relax. There was plenty of plush seating for kicking back. Perhaps the lounge is the best great selling point for Aloft with its comfy sofas and vivid, contemporary decor. All in all, Aloft, a Marriott property proved to be what it is hyped up to be, a very inviting and modern hotel that screams millennial hip. I mean... the vibe is super cas(ual) throughout the place, right from the reception desk with staff who seemed more like your friends checking you in and out than prototypical hotel professionals. Modern electric pop sounds dominate the entire lobby floor which resembles a social club and rec center in one. Instead of getting a newspaper at reception for gratis, I got the latest news from the long lobby news scroll built on the interior wall. And then there was, of course, the dedicated selfie spot situated in the lobby, a "cell phone" booth. Oh, how millennial!

It was a well over an hour of chill-laxing in the lobby when my hunger reach to the point of giving into some de-lish substance. The signature hotel cafe, Re:Fuel, was tempting with its healthy, artisanal snacks and pastries but only a good hot meal could satisfy. Predictably, the hotel offerings were overpriced as hell but the $15 for an Amy's Frozen dinner was just ridiculous and unacceptable. Since it was late and the local In-and-Out and other grub joints were not an easy walk away, it was time to press for an Uber Eats food delivery. There were some tasty Thai and sushi offerings but I wasn't feeling Asian. Ultimately, the menu at fusion spot, Barrel Bistro spoke to me. I made an order of Kobe beef Barrel Burger and loaded Patata Fries. My God, everything was licking finger delicious - thing was it took about 90 minutes to get my food! Naturally, this big time delay happened at my most desperate famished moment. But ultimately all was well with appetite satisfied and a good night's slumber.

And just like that it was the end of my Brea Area weekender. It was real, San Fran and Oak town -but it was time to get back to my beloved SoCal.

Pre-trip planning a visit to the Bay Area, San Francisco and Oakland area

The Bay Area had been calling me over and again- for well over 15 years. Finally, the SoCal girl answered. What took so long?

It wasn't SoCal bias or disdain of anything San Francisco or Oakland getting in the way. No rhyme or reason really. However, time was up, time and distance was kept away enough. 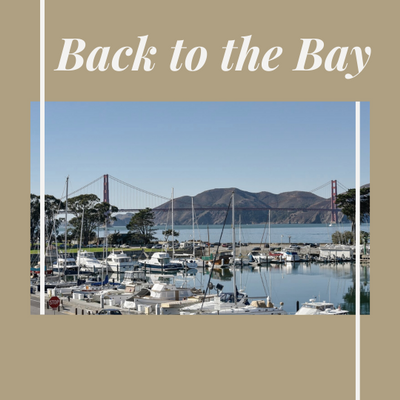 What truly instigated a visit up to the Bay - the desire to see the Oakland Raiders in the final year playing as their original Oaktown selves before jetting down to Las Vegas for the long foreseeable future. Surely, just a Sunday afternoon football game does not suffice for a proper Bay visit. A two-day visit is a tease but a full Saturday and Sunday was at my disposal for travel.

So, on to planning a quickie a solo Norcal weekender.

I factored in about $500-$700 (Flights included) for a modest with some" frills" stay in the Bay area.
Frills pretty much meaning a splurge on a San Francisco foodie treat or two.

Packing: Keep it light and essential
Lightweight apparel
A good pair of walking shoes (The hilly San Francisco pavement is unforgiving)
Warm jacket - the wind'll get you good in Norcal.